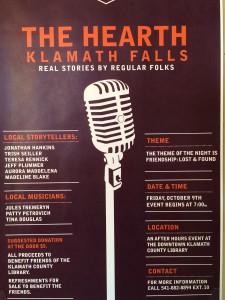 Every seat (over 80) was filled at the Klamath County Library to hear six local members of the Klamath Falls community tell true stories on the theme Friends: Lost and Found. This was the inaugural event for The Klamath Falls Hearth, a program which seeks to help communities build relationships, eradicate shame, and support local nonprofits through personal stories. Three community members from Klamath Falls received training from Mark Yaconelli, founder and director of The Hearth in Ashland, Oregon last spring as part of a grant from the Oregon Community Foundation and The Ford Family Foundation. The opening event presented a mix of heartfelt stories of friends found in Tibet, a birthing class, a hospital ward, and a car accident to friends lost in childhood. The music, by a series of local musicians, presented a beautiful mix of folk and classical pieces that matched the stories. The Klamath Falls Hearth will now be a regular storytelling series sponsored by the Klamath County Library. Congratulations to Charla Oppenlander, Ruth Chamberlin, and Debbie Plummer for all of their work in organizing this important community gathering. 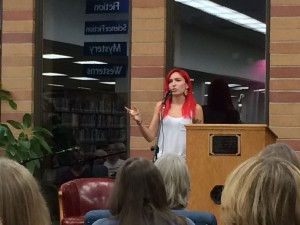